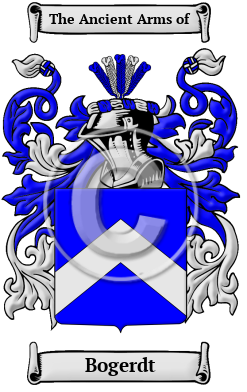 The Bogerdt surname may have been a topographic name for someone living by an orchard, or a habitational name taken on from any of various places named with this word.

Early Origins of the Bogerdt family

The surname Bogerdt was first found in Holland, where the name became noted for its many branches in the region, each house acquiring a status and influence which was envied by the princes of the region. The name was first recorded in Amsterdam, an ancient 13th century town held by the Lords of Amstel. Giesebrecht II built a castle there. Geisbrecht III built the dam to keep out the sea.

Bogerdt is a Dutch toponymic surname meaning "orchard" and may indicate the occupational fruit grower.

Early History of the Bogerdt family

Another 39 words (3 lines of text) are included under the topic Early Bogerdt Notables in all our PDF Extended History products and printed products wherever possible.

Bogerdt migration to the United States +

Bogerdt Settlers in United States in the 18th Century