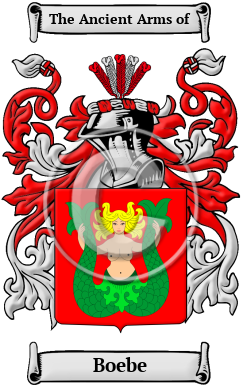 The surname Boebe is derived from the nickname "boebel", an Old German word meaning small. The original bearer of the name was someone who was noted for their diminutive size. A broad and miscellaneous class of surnames, nickname surnames refer to a characteristic of the first person who used the name. They can describe the bearer's favored style of clothing, appearance, habits, or character.

Early Origins of the Boebe family

The surname Boebe was first found in the duchy of Wuerttemberg, where the family came from humble beginnings but gained a significant reputation for its contribution to the emerging mediaeval society. It later became more prominent as many branches of the same house acquired distant estates and branches, some in foreign countries, always elevating their social status by their great contributions to society. The name originates from "Boebel," a word which referred to something small. Chronicles first mention Wernhard dictus Bebele, who was born in Frankfurt around 1307. Ancient chronicles also mention Hans der Bebler (c.1376) of Waldshut, Hans Baebler (c.1358) of Aargau, and Hans Boebel (c.1480) of Wuerttemberg.

Early History of the Boebe family

Notables with the surname Boebe during this period were Heinrich Bebel (1472-1518), who was a well known professor at Tuebingen and humanist of the time. He was crowned poet (gekroenter Dichter) by Maximilian I in 1501. William...
Another 37 words (3 lines of text) are included under the topic Early Boebe Notables in all our PDF Extended History products and printed products wherever possible.

Boebe migration to the United States +

Boebe Settlers in United States in the 18th Century

Boebe Settlers in Canada in the 18th Century