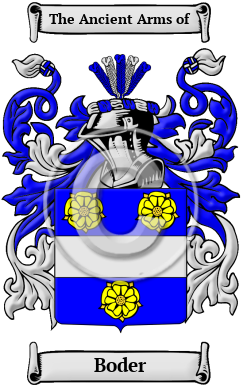 The Boder surname is derived from German word "boden," which means "floor" or "bottom." It is thought that the first Boder family may have lived in the bottom of a valley.

Early Origins of the Boder family

The surname Boder was first found in the duchy of Brunswick, where the name emerged in mediaeval times as one of the notable families of the region. From the 13th century the surname was identified with the great social and economic evolution which made this territory a landmark contributor to the development of the nation.

Early History of the Boder family

Notables of the time included Johann Joachim Bode (1720-1793), who was a prominent publisher and translator in Weimar, as well as a friend and business partner of the great Lessing. Johann Joachim Christoph Bode was born at Barum in Brunswick in 1730. He had a strange and varied life as bassoon and oboe-player, composer, newspaper editor...
Another 55 words (4 lines of text) are included under the topic Early Boder Notables in all our PDF Extended History products and printed products wherever possible.

Boder migration to the United States +

Boder Settlers in United States in the 19th Century