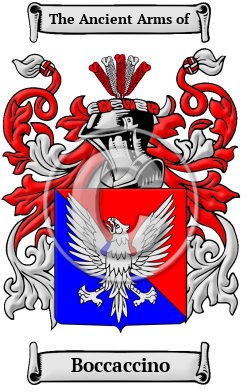 From the ancient and picturesque Italian region of Venice emerged a variety of distinguished names, including the notable surname Boccaccino. Although people were originally known only by a single name, it became necessary for people to adopt a second name to identify themselves as populations grew and travel became more frequent. The process of adopting fixed hereditary surnames was not complete until the modern era, but the use of hereditary family names in Italy began in the 10th and 11th centuries. Italian hereditary surnames were developed according to fairly general principles and they are characterized by a profusion of derivatives coined from given names. Although the most traditional type of family name found in the region of Venice is the patronymic surname, which is derived from the father's given name, local surnames are also found. Local names, which are the least frequent of the major types of surnames found in Italy, are derived from a place-name where the original bearer once resided or held land. Often Italian local surnames bore the prefix "di," which signifies emigration from one place to another, but does not necessarily denote nobility. The Boccaccino family lived in the city of Venice, where the Bocho family first settled in 804.

Early Origins of the Boccaccino family

The surname Boccaccino was first found in the city of Venice, where the Bocho family first settled in the year 804.

Early History of the Boccaccino family

Prominent among members of the family was Nicolo Boccasino of Treviso, who was made Pope in 1300 and given the new name Benedetto XI; Federico Boccaccio, Giovanni's brother, was priest of the Florentine Republic in 1342, and after him seven other members of the Boccaccio family held this position; Dorotea Bucca (1360-1436) (also Dorotea Bocchi) was an Italian physician, Chair of Medicine and Philosophy at the University of Bologna for over forty years from 1390; Domenico Bocchi was born in Parma in 1425, and was very involved with the Catholic Church; the Bocchiardi family of Pinerolo, counts, were important members of...
Another 144 words (10 lines of text) are included under the topic Early Boccaccino Notables in all our PDF Extended History products and printed products wherever possible.

Migration of the Boccaccino family

Early North American immigration records have revealed a number of people bearing the name Boccaccino or a variant listed above: Anna Buchi, who arrived with her husband and 6 children in Philadelphia, Pennsylvania, in 1743; Lorenzo Boccaccio, aged 21, who arrived at Ellis Island from Pastorano, Italy, in 1920.