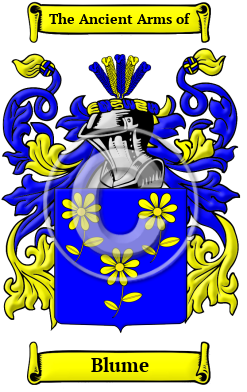 The roots of the distinguished German surname Blume lie in the northern province of Schleswig-Holstein. The name is derived from the Middle Low German "blom," or the German word "blume," meaning "flower;" thus, it was likely originally borne by someone living near a flowering meadow, or was perhaps an occupational name for a gardener or florist.

Early Origins of the Blume family

The surname Blume was first found in Schleswig-Holstein, where the name was anciently associated with the tribal conflicts of the area. They declared allegiances to many nobles and princes of early history, lending their influence in struggles for power and status within the region. They branched into many houses, and their contributions were sought by many leaders in their search for power. The first known bearer of the name was Lüdeke Blome, who was a resident of Hamburg in 1258.

Early History of the Blume family

Prominent among members of the name Blume in this period include Samuel Blommaert (Bloemaert, Blommaerts, Blommaart, Blomert) (1583-1651), a Flemish/Dutch merchant and director of the Dutch West India Company from 1622 to 1629 and again from 1636 to 1642; Gustav...
Another 40 words (3 lines of text) are included under the topic Early Blume Notables in all our PDF Extended History products and printed products wherever possible.

In the United States, the name Blume is the 5,930th most popular surname with an estimated 4,974 people with that name. [1]

Blume migration to the United States +

Blume Settlers in United States in the 18th Century

Blume Settlers in United States in the 19th Century

Blume Settlers in Canada in the 18th Century

Historic Events for the Blume family +