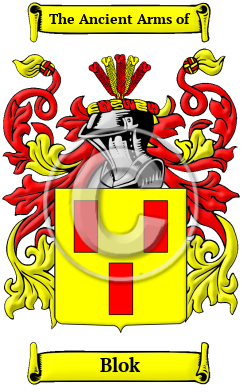 Early Origins of the Blok family

The surname Blok was first found in Pomerania, where this family name became a prominent contributor to the development of the district from ancient times. Always prominent in social affairs, the name became an integral part of that eastern region as it emerged to form alliances with other families within the Feudal System and the nation.

Early History of the Blok family

Spelling variations of this family name include: Bloch, Block, Bloche, Blocher, Blochmann and others.

Prominent bearers of the name Blok at this time were Benjamin Block, or Blok (1631-1690) German-Hungarian Baroque painter, known for his portraits; Anna Katharina Block (1642-1719), a German Baroque flower painter; Mark Eliezer Bloch (1723-1799), a well-known naturalist specializing in the study...
Another 42 words (3 lines of text) are included under the topic Early Blok Notables in all our PDF Extended History products and printed products wherever possible.

In Netherlands, the name Blok is the 129th most popular surname with an estimated 8,476 people with that name. [1]

Blok migration to the United States +

Blok Settlers in United States in the 19th Century

Blok Settlers in United States in the 20th Century

Blok Settlers in New Zealand in the 19th Century