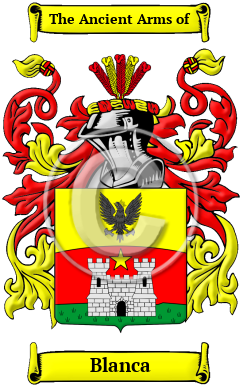 Early Origins of the Blanca family

The surname Blanca was first found in Austria, where the name Bianchi gained prominence after their arrival to the area. Originally from Italy, the Bianchi family was brought to Austria from King Ferdinand I. This family branched into many houses, both in the Italian regions of Sicily, Bologna and Tolentino and in various Austrian districts. Their contributions were sought by many leaders in their search for power.

Early History of the Blanca family

During this period prominent bearers of the name Blanca were Francesco Bianchi (c.1752-1810), Italian composer best known for his operas, of which he wrote over 90, such as "La villanella rapita" (Venice...
Another 31 words (2 lines of text) are included under the topic Early Blanca Notables in all our PDF Extended History products and printed products wherever possible.

Blanca migration to the United States +

Blanca Settlers in United States in the 19th Century