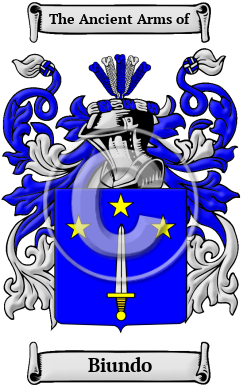 Early Origins of the Biundo family

The surname Biundo was first found in Sardinia (Italian: Sardegna, Sardinian: Sardigna), the second largest island in the Mediterranean Sea. In 238 B.C the Carthaginians revolted and Rome took over. Saracens occupied 720 A.D. 1164 found Frederick Barbarosa giving the island to Barisone. Pisans succeeded in the 13th. Arragons took over in 1403 and it remained a Spanish province until the War of the Spanish Succession. In 1848 complete political union with Piedmont and Italy was granted. In those ancient times only persons of rank, the podesta, clergy, city officials, army officers, artists, landowners were entered into the records. To be recorded at this time, at the beginning of recorded history, was of itself a great distinction and indicative of noble ancestry. The name Biundo comes from the Italian word "biondo," which means "blond." The name therefore most likely originated as a nickname for someone with a very light beard or hair.

Early History of the Biundo family

Prominent among bearers of this surname in early times was Flavio Biondo (Latin Flavius Blondus) (1392-1463), an Italian Renaissance humanist historian. He was one of the first historians to use a three-period division of history (Ancient, Medieval, Modern) and is known as one of the first archaeologists. Giovanni del Biondo was a 14th-century Italian painter of the Gothic and early-Renaissance period. He was active in the period 1356-1399 and is mainly known for his panel paintings. Sir Giovanni Francesco Biondi (1572-1644), was an Italian historian and romance writer, born in 1572 at Lesina, an island in the Gulf of Venice off Dalmatia. "Entering...
Another 131 words (9 lines of text) are included under the topic Early Biundo Notables in all our PDF Extended History products and printed products wherever possible.

Migration of the Biundo family