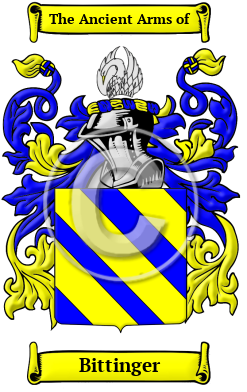 Early Origins of the Bittinger family

The surname Bittinger was first found in Germany. And, while a specific early location of this name could not be found, names ending in the suffix "-er," generally come from the Westphalia region, while names ending in "-gen" are usually from the Rhineland. By the late Middle Ages, bearers of the name were established in Luxemburg, where bearers of Bettingen were granted coats of arms. The variation of this name Bettin, was anciently found in Solothurn.

Early History of the Bittinger family

This web page shows only a small excerpt of our Bittinger research. Another 66 words (5 lines of text) covering the years 1649 and 1709 are included under the topic Early Bittinger History in all our PDF Extended History products and printed products wherever possible.

Spelling variations of this family name include: Bettinger, Bettingen, Betting and others.

More information is included under the topic Early Bittinger Notables in all our PDF Extended History products and printed products wherever possible.

In the United States, the name Bittinger is the 12,271st most popular surname with an estimated 2,487 people with that name. [1]

Bittinger migration to the United States +

Bittinger Settlers in United States in the 18th Century

Bittinger Settlers in United States in the 19th Century