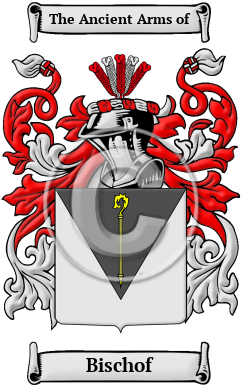 Early Origins of the Bischof family

The surname Bischof was first found in Bavaria, where the name was anciently associated with the tribal conflicts of the area. They declared allegiances to many nobles and princes of early history, lending their influence in struggles for power and status within the region. They branched into many houses, and their contributions were sought by many leaders in their search for power.

Early History of the Bischof family

This web page shows only a small excerpt of our Bischof research. Another 75 words (5 lines of text) covering the years 1628, 1671, 1794, 1812, 1823 and 1849 are included under the topic Early Bischof History in all our PDF Extended History products and printed products wherever possible.

Prominent among members of the name Bischof in this period include Jan de Bisschop, also known as Johannes Episcopius (1628-1671), a lawyer, who became a Dutch Golden Age painter and engraver. Dr. Ludwig Friedrich Christoph Biscoff was orn at Dessau Nov. 27, 1794. His father was a cello-player in the Duke's band, and the boy was early initiated into music, though (like so many musicians) intended for science. In...
Another 68 words (5 lines of text) are included under the topic Early Bischof Notables in all our PDF Extended History products and printed products wherever possible.

In the United States, the name Bischof is the 15,918th most popular surname with an estimated 2,487 people with that name. [1]

Bischof migration to the United States +

Bischof Settlers in United States in the 18th Century

Bischof Settlers in United States in the 19th Century

Historic Events for the Bischof family +