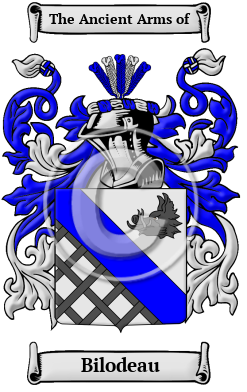 The name Bilodeau is an old Breton name. It comes from when the family lived in Brittany, where the family had settled in a seigniory which dates back to 1450.

Early Origins of the Bilodeau family

The surname Bilodeau was first found in Brittany, where the family had settled in a seigniory which dates back to 1450.

The members also formed branches in other regions. The branch Bilaudeau was established in the department of Landes, in the district of Dax. The branch Bilaudelle was established in a village in Basses-Pyrénées, in the district of Oloron. Several members of this illustrious family became renowned. Guillaume-Pascal Billot, a doctor, was born in 1768, the son of Jean-Baptiste, a notary in Cucuron (Vaucluse). Frédéric-Florentin Billot, who was born in Auxonne in 1805 and who died in 1868, was a publicist. Albert Billot, a diplomat, was born in 1841. Toussaint-Marie-René Billotte, who was born in Tarbes in 1846 and who died in 1914, was a renowned painter.

Jacques Bilodeau, born in 1636, son of Pierre and Jeanne, settled in Canada in the 17th century. After arriving in the province of Quebec he married Geneviève Longchamp, born in 1632, daughter of Pierre and Marie, on 28th October 1654. They remained together in Quebec until Jacques' death at Saint-François-de-l'île-d'Orléans on 8th February 1712. His wife, Geneviève, passed away six years later in 1718. [1]

Early History of the Bilodeau family

This web page shows only a small excerpt of our Bilodeau research. More information is included under the topic Early Bilodeau History in all our PDF Extended History products and printed products wherever possible.

French surnames were subject to numerous spelling alterations depending on the region and time it was used. The early development of the French language relied heavily on borrowing elements and grammar from other languages. For example, Old French was infused with Germanic words and sounds when barbarian tribes invaded and settled in France after the fall of the Roman Empire. Middle French also borrowed heavily from the Italian language during the Renaissance. As a result of these linguistic and cultural influences, the name Bilodeau is distinguished by a number of regional variations. The many spelling variations of the name include Billot, Billotte, Billotet, Billotey, Billod, Bilodeau, Bilaudeau, Bilodel, Bilaudel, Bilodelle, Bilaudelle, Billaud, Billaux, Billaut, Billeau, Billeaux, Bilhaut and many more.

Another 43 words (3 lines of text) are included under the topic Early Bilodeau Notables in all our PDF Extended History products and printed products wherever possible.

Bilodeau migration to the United States +

In 1643, 109 years after the first landings by Cartier, there were only about 300 people in Quebec. Migration was slow. The fur trade attracted migrants, both noble and commoner. By 1675, there were 7000 French in Quebec. By the same year the French Acadian presence in the Maritimes had reached 500. The French founded Lower Canada, thus becoming one of the two great founding nations of Canada. The family name Bilodeau has made many distinguished contributions in France and New France to the world of science, culture, religion, and education. Amongst the settlers in North America with this distinguished name Bilodeau were

Bilodeau Settlers in United States in the 19th Century

Bilodeau Settlers in United States in the 20th Century

Bilodeau Settlers in Canada in the 17th Century

Bilodeau Settlers in Canada in the 18th Century