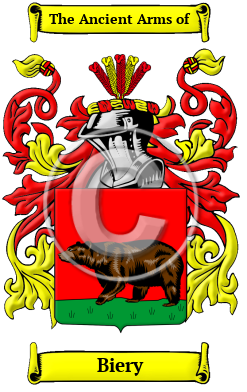 The German surname Biery is generally thought to be derived from the word "bier" and "mann, " which translates to "beer-man." Thus the original bearer of the name was likely a tavern owner, a brewer, or someone whose occupation involved beer.

Early Origins of the Biery family

The surname Biery was first found in the region of the Rhineland-Palatinate, where the ancestors of bearers of the Biery surname were an integral part of the local communities, and contributed to the development of the Feudal System that became the backbone of early European society. Records of this surname in Germany date back as far as the thirteenth century. In the year 1290, there were two men bearing this name: Rudolf, and Wernher genannt (called) die Biermenlin in the town of Esslingen. There is also a record of a Werner der Bierman, whose name appeared in a document in Wurttemburg in 1349.

Early History of the Biery family

This web page shows only a small excerpt of our Biery research. More information is included under the topic Early Biery History in all our PDF Extended History products and printed products wherever possible.

Spelling variations of this family name include: Bier, Bierman, Biermann, Behrman, Behrmann and others.

More information is included under the topic Early Biery Notables in all our PDF Extended History products and printed products wherever possible.

Biery migration to the United States +

Biery Settlers in United States in the 18th Century