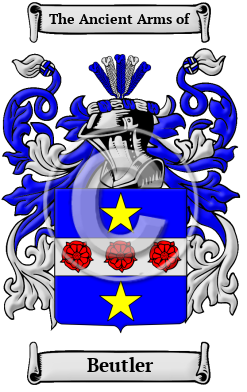 The German state of Bavariais the ancestral home of the Beutler family. Hereditary surnames began to be used in Germany during the 12th century. Names like Beutler, that came from the name of the job done by their initial bearer, were very popular. Beutler is an occupational name for a cooper or a barrel maker. Further research revealed that the name is derived from the German word Bute, which means cask or wine barrel. In the Middle Ages, the Beutler family was responsible for making the barrels that held ale, beer and wines. In Bavaria, the Beutler family became renowned for its many branches and for the influential role it played in the social, economic and political development of the region.

Early Origins of the Beutler family

The surname Beutler was first found in Bavaria, where the name Buttner became noted for its many branches within the region where each house acquired a status and influence which was envied by the princes of the region. Over time, the family became a power unto themselves and were elevated to the ranks of nobility.

Early History of the Beutler family

Many cultural groups lived in the German states in medieval times. Each had its own dialect and traditions, and unique variations of popular names. Low German, which is similar to contemporary Dutch, was spoken in Westphalia. German names are characterized by additions such as regional suffixes and phrases that tell something about the origin or background of its original bearer. Further contributing to the variation in German names was the fact that there were no spelling rules in medieval times: scribes recorded names according to their sound. The recorded spelling variations of Beutler include Buttner, Butner, Buttnner, Butnner, Beuttner, Butener, Buttener, Buttnen, Buttnel, Buttnele, Butnen, Butnel, Butnele, Bottner, Boettner, Buettner, Botner, Boetner and many more.

Prominent among members of the name Beutler in this period include Crato Bütner (1616-1679), a German Baroque composer, but his collection of baroque works disappeared in 1945. Benjamin Beutler, born at Mühlhausen near Erfurt 1793; died there 1837; was a friend of Forkel, organist of...
Another 44 words (3 lines of text) are included under the topic Early Beutler Notables in all our PDF Extended History products and printed products wherever possible.

Beutler migration to the United States +

Beutler Settlers in United States in the 18th Century

Beutler Settlers in United States in the 19th Century