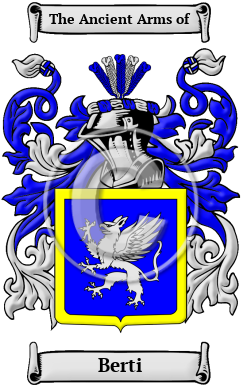 Early Origins of the Berti family

The surname Berti was first found in the city of Ferrara, where Giacomo Bertazzi was assistant to Pope Sergio II in 845.

Early History of the Berti family

This web page shows only a small excerpt of our Berti research. More information is included under the topic Early Berti History in all our PDF Extended History products and printed products wherever possible.

In comparison with other European surnames, Italian surnames have a surprising number of forms. They reflect the regional variations and the many dialects of the Italian language, each with its own distinctive features. For example, in Northern Italy the typical Italian surname suffix is "i", whereas in Southern Italy it is "o". Additionally, spelling changes frequently occurred because medieval scribes and church officials often spelled names as they sounded rather than according to any specific spelling rules. The spelling variations in the name Berti include Berti, Berto, Bert, Berta, De Berti, De Berto, Di Berto, Bertelli, Bertello, Bertella, Bertini, Bertino, Bertinetti, Bertinetto, Bertucci, Berteri, Bertieri, Bertera and many more.

Prominent among members of the family was Francesco Bertazzi, who was head of the Venetian Republic in the year 1007; Enrico Bertoli in Mazzara, elected Cardinal by Pope Pasquale II in 1110; the Bertone family of Chieri owned vast lands and belonged to the most ancient and most prestigious nobility; Bellincione Berti, born in 1220 in Florence, was talked about twice by Dante in the Paradiso as being a noble citizen; Simone di Bartolomeo Berti was a Florentine monk in 1450; Giacomo Bertacchi was mayor of Sassuolo in 1602; another Giacomo Bertacchini was mayor of Savignano in 1690; Jacopo Bertoia, also...
Another 140 words (10 lines of text) are included under the topic Early Berti Notables in all our PDF Extended History products and printed products wherever possible.

Migration of the Berti family

Historic Events for the Berti family +