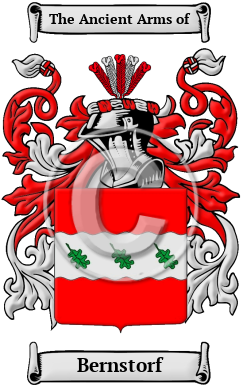 The German surname Bernstorf emerged in the lands that formed the modern state of Lower Saxony, which is presently bordered by the North Sea, the Hartz mountains and the Elbe and Ems rivers. Lower Saxony was previously a medieval Saxon dukedom. German surnames developed at a time when most of Lower Saxony, and most of the German provinces, were states of the Holy Roman Empire. At first people used only a single name, but as the population grew and people began to travel, they began to find it necessary to take on an additional name to differentiate themselves.

Early Origins of the Bernstorf family

The surname Bernstorf was first found in Hanover, where the name became noted for its many branches within the region, each house acquiring a status and influence which was enrolled by the princes of the region. In their later history the name became a power unto themselves and were elevated to the ranks of nobility as they grew into this most influential family.

Early History of the Bernstorf family

Notables of the time included Christian Guenther Count von Bernstorff (1769-1835), who was a Danish and Prussian statesman and diplomatist. He was born in Copenhagen on April 3, 1769 as the son of Count Andreas Peter von Bernstorff. Christian started his career in 1787 as an attache to the representative of Denmark at the opening of the Swedish diet. He later became secretary of state for foreign affairs and privy...
Another 70 words (5 lines of text) are included under the topic Early Bernstorf Notables in all our PDF Extended History products and printed products wherever possible.

Migration of the Bernstorf family

Some of the first settlers of this family name or some of its variants were: members of the family who settled along the eastern seaboard of the United States during the 19th century.