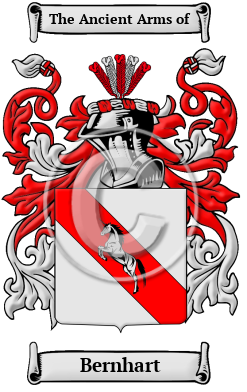 The prestigious family surname Bernhart originated in the territory that eventually became the German state of Prussia. In the 19th century, this state was virtually unrivalled militarily, and its rapid industrial growth made it a contender for economic superiority in Europe as well. However, in the medieval era, Prussia was fragmented and inhabited by numerous barbarian tribes, who fought amongst themselves for control of the land. The borders of the barbarian kingdoms, which were established after the fall of the Roman Empire, changed repeatedly. The region that came to be known as Prussia was roughly divided between the territories of Brandenburg-Prussia, West Prussia and East Prussia. The Bernhart family emerged in Brandenburg-Prussia, which is essentially the birthplace of modern Germany. By the 19th century, Brandenburg-Prussia had incorporated East Prussia, West Prussia and many other German territories. Moreover, in the late 19th century, it led the German states in the unification of Germany.

Early Origins of the Bernhart family

The surname Bernhart was first found in Brandenburg, Mecklenburg, and throughout the lands that would later form the Prussian Empire, where the name became noted for its many branches, each house acquiring a status and influence which was envied by the princes of the regions. In their later history the name became a power unto themselves and was elevated to the ranks of nobility as they grew into this most influential family. In its mediaeval context, the literal meaning of the name was "baerenkuehn," that is, "bear-brave." The name began its rise to prominence as one of the most popular first names of northern Germany in the Middle Ages before becoming firmly grounded as a surname.

Early History of the Bernhart family

Many cultural groups lived in the German states in medieval times. Each had its own dialect and traditions, and unique variations of popular names. Low German, which is similar to contemporary Dutch, was spoken in Westphalia. German names are characterized by additions such as regional suffixes and phrases that tell something about the origin or background of its original bearer. Further contributing to the variation in German names was the fact that there were no spelling rules in medieval times: scribes recorded names according to their sound. The recorded spelling variations of Bernhart include Bernhard, Bernhardi (Alemannic), Bernhardy (Latin genetive form found along Rhine and Danube rivers), Bernardt, Bernhardt, Bernehard, Bernehardt and many more.

Notable figures of the time with the name Bernhart were Duke Bernhard of Saxen-Weimar (1604-1639), who was a celebrated general in the Thirty Years' War. He was born in 1604 in Weimar as the eleventh son of John, duke of Saxen-Weimar. At the outbreak of the Thirty Years' War he took the field on the Protestant side. Because of his contribution to Protestantism in Germany and his bravery shown on the battlefield Bernhard he was regarded by German Protestants as the savior of their religion. Christoph Bernhard, capellmeister at Dresden; son of a poor sailor; born at Dantzic, 1612. He was...
Another 153 words (11 lines of text) are included under the topic Early Bernhart Notables in all our PDF Extended History products and printed products wherever possible.

Bernhart migration to the United States +

Prussia played an extremely influential role in shaping modern German history. It remained a part of Germany until after the Second World War. Prussia was divided among the Soviet Union, Poland, East Germany and West Germany. Many Prussians became residents of these new countries after the War, and many migrated to other parts of Germany or Europe, as well as to North America. In the United States, the majority of settlers landed in Philadelphia, and moved on to Ohio, Texas, Illinois, California, New York, and Maryland. Many German settlers also migrated to Canada, particularly to Ontario and the Prairies. Amongst the settlers in North America with this distinguished name Bernhart were

Bernhart Settlers in United States in the 18th Century

Bernhart Settlers in United States in the 19th Century