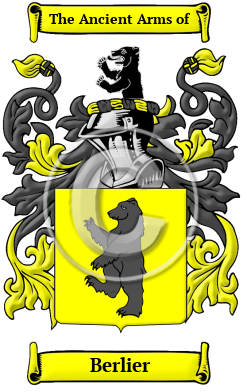 The Berlier family name first began to be used in the German state of Bavaria. After the 12th century, hereditary surnames were adopted according to fairly general rules, and names that were derived from locations became particularly common. The family name Berlier is a local surname. Originally denoting the proprietorship of an estate or influence within a village, the German preposition von, which means from or of, used with local names, was taken as a mark of aristocracy. The surname Berlier was given to someone who lived in Bavaria, where the family possessed vast estates and resided in an elegant feudal manor. During the Middle Ages, the Berlier family became a part of the landed aristocracy and wielded considerable prestige and influence in the region. The Berlier family expanded into other parts of the German territories after the 16th century. Following the general pattern of great European migration, and specific interests in military, political and religious occupations, bearers of the name relocated and prospered in numerous different regions on the European continent. The family became a prominent contributor to the development of ancient Bavarian towns such as Rothenburg.

Early Origins of the Berlier family

The surname Berlier was first found in Bavaria, where this family name became a prominent contributor to the development of the towns such as Rothenburg from ancient times. Always prominent in social affairs, the name became an integral part of that turbulent region as it emerged to form alliances with other families within the Feudal System and the nation.

Early History of the Berlier family

This web page shows only a small excerpt of our Berlier research. Another 76 words (5 lines of text) are included under the topic Early Berlier History in all our PDF Extended History products and printed products wherever possible.

In the medieval era, many different cultural groups lived in the German states. There are thus many regional variations of German surnames from that era. Westphalians spoke Low German, which is similar to modern Dutch. Many German names carry suffixes that identify where they came from. Others have phrases attached that identify something about the original bearer. Other variations in German names resulted from the fact that medieval scribes worked without the aid of any spelling rules. The spelling variations of the name Berlier include Berl, Berle, Berler, Behrle, Behrli, Berlere and many more.

More information is included under the topic Early Berlier Notables in all our PDF Extended History products and printed products wherever possible.

Migration of the Berlier family

The great European flow of migration to North America, which began in the middle of the 17th century and continued into the 20th century, was particularly attractive to those from Bavaria who wished to escape either poverty or religious persecution. For many Bavarian tenant farmers, the chance to own their own land was a major incentive. So the widespread colonization of the United States began in 1650, when many immigrants from Germany settled in pockets in Pennsylvania, Texas, New York, Illinois, and California. In Canada, German settlement centered in Ontario and the prairie provinces. Among those of this surname listed in various historical records were: Jan Berler, who came to Philadelphia, Pa. in 1795; and Erasmus Behrle came to the same city in 1865.