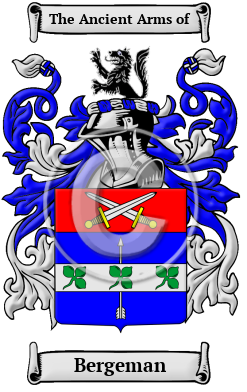 The German surname Bergeman is derived from the word "berg," which means "hill," or "mountain." Thus, the first of the name were likely people who lived on or by a hill or mountain.

Early Origins of the Bergeman family

The surname Bergeman was first found in West Prussia, where the name contributed greatly to the development of an emerging nation which would later play a large role in the tribal and national conflicts of the area. In later years the name branched into many houses, each playing a significant role in the local social and political affairs.

Early History of the Bergeman family

Spelling variations of this family name include: Bergmann, Bergman, Bergemann (Cologne, Westphalia) and many more.

Notable figures of the period with the name Bergeman were Israel von Bergmann (d.1748), the Lord of the manor Tetterin near the town Anklam in Pomerania, who became an influential Privy Councillor at the royal court of Prussia. Ernst von Bergmann (1836-1907) was Professor of Surgery...
Another 46 words (3 lines of text) are included under the topic Early Bergeman Notables in all our PDF Extended History products and printed products wherever possible.

Migration of the Bergeman family

Some of the first settlers of this family name or some of its variants were: Carl Anton Bergman came to Philadelphia, Pa. in 1751; George Bergman arrived in Boston, Massachusetts in 1768; Christian Bergmann settled in Texas in 1854.