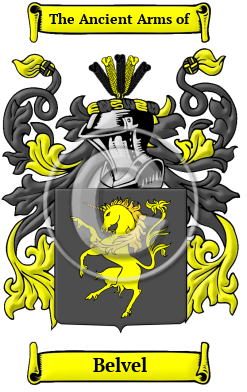 The surname Belvel is a ancient Westphalian patronymic name. Names derived from the given name of the father of the original bearer are called patronymic, while names derived from the given name of the mother are called metronymic. Belvel comes from the Germanic personal name Baldawin, which in turn derives from the Gothic word Balths, the Old German word bald, and the German balt, which mean courageous. The names Baldawin and Baldwin translate into courageous friend, from bald, which means courageous and wini, which means friend.

Early Origins of the Belvel family

The surname Belvel was first found in Westphalia, where the name Belven made a great early contribution to the feudal society of early Europe. The name Belven became prominent in local affairs and branched into many houses where family members continued to play important roles in the savage tribal and national conflicts which erupted as each group vied for enhanced power and status in an ever changing territorial profile.

Early History of the Belvel family

This web page shows only a small excerpt of our Belvel research. Another 77 words (6 lines of text) are included under the topic Early Belvel History in all our PDF Extended History products and printed products wherever possible.

In the medieval era, many different cultural groups lived in the German states. There are thus many regional variations of German surnames from that era. Westphalians spoke Low German, which is similar to modern Dutch. Many German names carry suffixes that identify where they came from. Others have phrases attached that identify something about the original bearer. Other variations in German names resulted from the fact that medieval scribes worked without the aid of any spelling rules. The spelling variations of the name Belvel include Belven, Bellven, Belvenn, Bellvenn, Bellvens, Belvens, Belver, Bellver, Belvers, Bellvers, Belvel, Bellvel, Belvele, Bellvele, Balven, Balver, Balvel, Balvele, Baelven, Baelver, Baelvel and many more.

More information is included under the topic Early Belvel Notables in all our PDF Extended History products and printed products wherever possible.

Migration of the Belvel family

For many Germans, emigration to North America was an inviting alternative to the trials of life in the old country. From the mid-17th into the present century, thousands of Germans migrated across the Atlantic. They capitalized on the chance to escape poverty and persecution, and to own their own land. After 1650, Germans settled throughout the states of Pennsylvania, Texas, New York, Illinois, and California. Many also landed in Canada, settling in Ontario or father west on the rich land of the prairies. Among them: Bevis Belver who arrived in Virginia in 1643; and other settlers who established themselves along the eastern coasts of the United States and Canada in the 18th and 19th centuries..