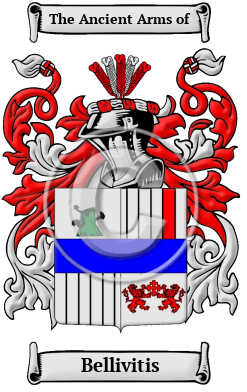 Early Origins of the Bellivitis family

The surname Bellivitis was first found in Bergamo in Lombardy, capital of the province of Bergamo, home to the Romanesque church of S.Maria Maggiore that is filled with fine art. The Piazza Garibaldi has notable architecture. From 1264 it was under Milan, but in 1428 it became Venetian. In those ancient times only persons of rank, the podesta, clergy, city officials, army officers, artists, landowners were entered into the records. To be recorded at this time, at the beginning of recorded history, was of itself a great distinction and indicative of noble ancestry.

Early History of the Bellivitis family

This web page shows only a small excerpt of our Bellivitis research. Another 177 words (13 lines of text) covering the years 1309, 1726, 1822, 1755, 1670 and 1668 are included under the topic Early Bellivitis History in all our PDF Extended History products and printed products wherever possible.

Another 37 words (3 lines of text) are included under the topic Early Bellivitis Notables in all our PDF Extended History products and printed products wherever possible.

Migration of the Bellivitis family

Some of the first settlers of this family name or some of its variants were: Filippo Belevita, aged 27, who arrived at Ellis Island from Tursi, in 1906.