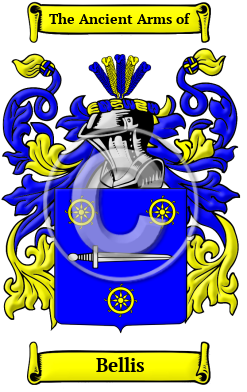 The surname Bellis is a name that was originally given to a near the outer wall of a feudal castle which is derived from the Old French word baille, which referred to such a structure.

Early Origins of the Bellis family

The surname Bellis was first found in Colchester, where they had been granted lands about the year 1500. The name was originally spelt Bellis. Baile Hill is a man-made earth mound in York, England. It is thought to have been built in 1068 and played a part in William the Conqueror's conquest of York.

Early History of the Bellis family

This web page shows only a small excerpt of our Bellis research. Another 68 words (5 lines of text) are included under the topic Early Bellis History in all our PDF Extended History products and printed products wherever possible.

Spelling variations of this family name include: Bayle, Bayles, Baile, Bailes, Bellis and others.

More information is included under the topic Early Bellis Notables in all our PDF Extended History products and printed products wherever possible.

In the United States, the name Bellis is the 14,691st most popular surname with an estimated 2,487 people with that name. [1]

Bellis migration to the United States +

Bellis Settlers in United States in the 18th Century

Bellis Settlers in United States in the 19th Century

Bellis Settlers in United States in the 20th Century

Bellis Settlers in Australia in the 19th Century

Bellis Settlers in West Indies in the 17th Century

Historic Events for the Bellis family +