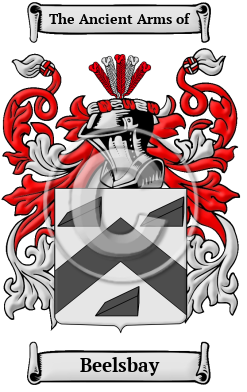 Early Origins of the Beelsbay family

The surname Beelsbay was first found in Lincolnshire at Bilsby, a parish, in the hundred of Calceworth, Lincolnshire. This village was listed as Billesbi in the Domesday Book [1] and meant "farmstead or village of a man called Bildr from the Old Norse personal name "by" [2] Alternatively the name could have come from Beelsby, a village in North East Lincolnshire. Conjecturally, the surname is descended from the tenant of the lands of Beelsby, held by Godric the King's Steward, who was recorded in the Domesday Book census of 1086. At that time, Beelsby held 3 mills.

Early History of the Beelsbay family

A multitude of spelling variations characterize Norman surnames. Many variations occurred because Old and Middle English lacked any definite spelling rules. The introduction of Norman French to England also had a pronounced effect, as did the court languages of Latin and French. Therefore, one person was often referred to by several different spellings in a single lifetime. The various spellings include Billesby, Billsby, Beelsby, Belsby, Bilsby, Bilbie, Bilsbie and many more.

More information is included under the topic Early Beelsbay Notables in all our PDF Extended History products and printed products wherever possible.

Migration of the Beelsbay family