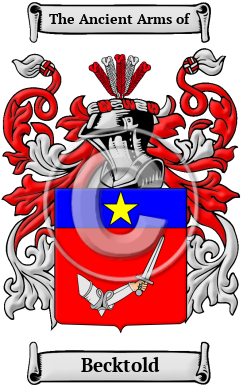 Early Origins of the Becktold family

The surname Becktold was first found in Hessen, where the family contributed greatly to the development of an emerging nation. The earliest bearers of this name to be mentioned in ancient chronicles were Bechtold of Fulda in 1387, Bechtold Suleffel of Frankfurt in 1442, and Tibertius Bechtolf of Frankfurt in 1568. Bachtel is a mountain of the Zurich Upperland, Swiss Prealps in the canton of Zurich. Atop of the mountain is Bachtel Tower, a 60 m (200 ft) tall radio tower.

Early History of the Becktold family

This web page shows only a small excerpt of our Becktold research. Another 200 words (14 lines of text) covering the years 1829, 1840, 1810, 1795, 1856 and 1795 are included under the topic Early Becktold History in all our PDF Extended History products and printed products wherever possible.

Another 41 words (3 lines of text) are included under the topic Early Becktold Notables in all our PDF Extended History products and printed products wherever possible.

Migration of the Becktold family