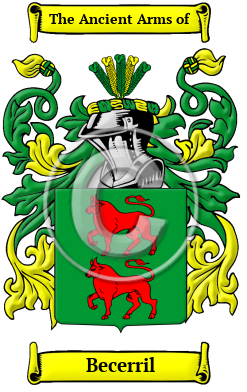 The distinguished surname Becerril is widespread in Spain. It is probably of local origin, deriving from a name place in an agricultural community. The surname Becerril was, in fact, used as a nickname for a high-spirited individual, which comes from the Spanish term for a young cow "becerra."

Early Origins of the Becerril family

The surname Becerril was first found in the kingdom of Castile, in north central Spain. Among the earliest records there is evidence that the Becerril family was present in Ciudad Real (Castilla La Nueva) during the Middle Ages.

Early History of the Becerril family

This web page shows only a small excerpt of our Becerril research. Another 64 words (5 lines of text) are included under the topic Early Becerril History in all our PDF Extended History products and printed products wherever possible.

Spelling variations of this family name include: Becerro, Bezarra, Becerril, Berrera and others.

More information is included under the topic Early Becerril Notables in all our PDF Extended History products and printed products wherever possible.

Migration of the Becerril family

Some of the first settlers of this family name or some of its variants were: Francisco Becerra who immigrated to Nombre de Dios, Panama in 1534; and Diego Becerra who came to New Spain in 1577 with his wife and children. Later settlers included Luis Antonio Becerra who arrived in PUerto Rico in 1860.