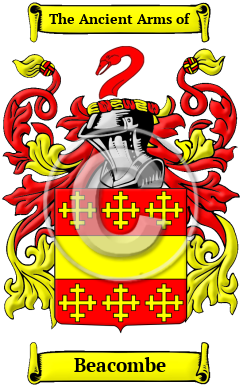 Beacombe is a name whose history on English soil dates back to the wave of migration that followed the Norman Conquest of England of 1066. The Beacombe family lived in Bedfordshire, Buckingham, and Hertfordshire. The geographical roots of the name, however, were established prior to the family's presence in Britain, and stem from the Old French Beauchamps, which refers to towns of that name in Manche and Somme.

Early Origins of the Beacombe family

The surname Beacombe was first found in Bedfordshire, Buckingham, and Hertford, where the name was "introduced into England at the Norman Conquest by Hugo de Beauchamp, or de Bello Campo, to whom William [the Conqueror] gave 43 lordships, chiefly in the county of Bedford. " [1]

Early History of the Beacombe family

Migration of the Beacombe family

Many English families left England, to avoid the chaos of their homeland and migrated to the many British colonies abroad. Although the conditions on the ships were extremely cramped, and some travelers arrived diseased, starving, and destitute, once in the colonies, many of the families prospered and made valuable contributions to the cultures of what would become the United States and Canada. Research into the origins of individual families in North America has revealed records of the immigration of a number of people bearing the name Beacombe or a variant listed above: Edward Beauchamp, a Huguenot and Freeman, who settled in Salem, Massachusetts in 1643; James Beacham, who arrived in Barbados in 1685; John Beacham, who settled in New England in 1698.