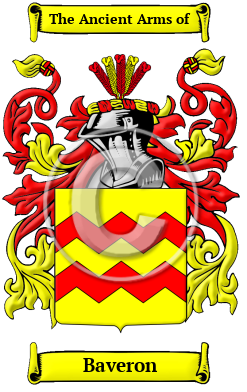 From the historic region known as the Rhineland comes the honored name Baveron. Originally, people were known only by a single name. However, as the population increased and people began to travel, hereditary surnames became necessary. Some of these surnames that formed in the Rhineland were patronymic surnames, which were derived from the father's given name. The surname Baveron was derived from a beautiful person which is derived from the Old French words beu and bel, which mean fair or lovely, and veir or voir, which mean to see. In the 8th and 9th centuries, the French language was commonly spoken in the German states. For example, the court of Charlemagne (742-814) was Christian and Latin-speaking, but the Frankish dialect of Old German and Old French were commonly used for personal names.

Early Origins of the Baveron family

The surname Baveron was first found in the Rhineland, where the name Beveren made a significant early contribution to European feudal society. The name Beveren became figured prominently in local affairs. It branched into many houses, where family members continued to play important roles in the savage tribal and national conflicts, which saw each group vying for increased power and status in an ever changing territorial profile.

Early History of the Baveron family

This web page shows only a small excerpt of our Baveron research. Another 87 words (6 lines of text) covering the years 167 and 1679 are included under the topic Early Baveron History in all our PDF Extended History products and printed products wherever possible.

More information is included under the topic Early Baveron Notables in all our PDF Extended History products and printed products wherever possible.

Migration of the Baveron family

The great European flow of migration to North America, which began in the middle of the 17th century and continued into the 20th century, was particularly attractive to those from the Rhineland who wished to escape either poverty or religious persecution. Many of those who left the Rhineland to seek their fortunes in the prosperous and free New World settled in the major urban centers of the United States and Canada. In the United States, the settlers from the Rhineland passed through immigration centers like that of Ellis Island, most of them moving on to Pennsylvania, Ohio, Texas, Illinois, California, and New York. In Canada, the majority of Rhinelanders settled in Ontario and the prairie provinces. An examination of passenger and immigration lists has revealed many important settlers to North America bearing the name Baveron, or one of its variants above: settlers who arrived and established themselves along the eastern seaboard of the United States and in Canada during the 18th and 19th centuries.