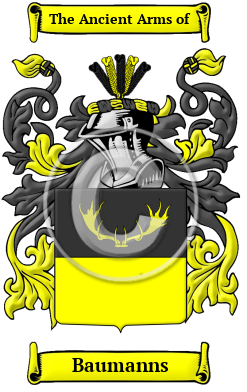 Early Origins of the Baumanns family

The surname Baumanns was first found in the Rhine region, where the name was anciently associated with the tribal conflicts of the area. They declared allegiances to many nobles and princes of early history, lending their influence in struggles for power and status within the region. They branched into many houses, and their contributions were sought by many leaders in their search for power. The earliest trace of the Baumann family is found in Strasbourg, where they flourished at the beginning of the 14th century.

Early History of the Baumanns family

In the medieval era, many different cultural groups lived in the German states. There are thus many regional variations of German surnames from that era. Westphalians spoke Low German, which is similar to modern Dutch. Many German names carry suffixes that identify where they came from. Others have phrases attached that identify something about the original bearer. Other variations in German names resulted from the fact that medieval scribes worked without the aid of any spelling rules. The spelling variations of the name Baumanns include Baumann, Bauman, Baumman, Baumenn, Baumen and many more.

Notables with the name Baumanns during this period were Nicolaus Baumann, the son of the Doctor of Law Joachim Baumann, who was a senator in Stralsund, Pomerania, and the Lord of the estates at Luedershagen. He was ennobled in...
Another 39 words (3 lines of text) are included under the topic Early Baumanns Notables in all our PDF Extended History products and printed products wherever possible.

Migration of the Baumanns family

The great European flow of migration to North America, which began in the middle of the 17th century and continued into the 20th century, was particularly attractive to those from the Rhineland who wished to escape either poverty or religious persecution. Many of those who left the Rhineland to seek their fortunes in the prosperous and free New World settled in the major urban centers of the United States and Canada. In the United States, the settlers from the Rhineland passed through immigration centers like that of Ellis Island, most of them moving on to Pennsylvania, Ohio, Texas, Illinois, California, and New York. In Canada, the majority of Rhinelanders settled in Ontario and the prairie provinces. An examination of passenger and immigration lists has revealed many important settlers to North America bearing the name Baumanns, or one of its variants above: Wilhelm Baumann, who arrived in Germantown, Pennsylvania in 1683. Conrad Bauman arrived in Philadelphia, Pa. in 1755; Jacob Bauman settled in Philadelphia in 1727.