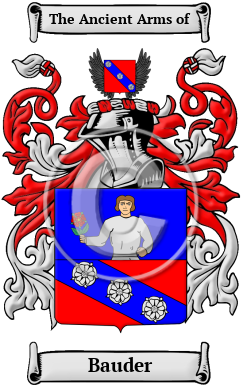 The surname Bauder is derived from an Old Germanic nickname, baldo or baudo, meaning bold. The same word can also mean joyful, so in some cases the name may have been used to refer to a person of that nature. A broad and miscellaneous class of surnames, nickname surnames referred to a characteristic of the first person who used the name. They can describe the bearer's favored style of clothing, appearance, habits, or character. It is associated with the region of Swabia, in the southwest of Germany.

Early Origins of the Bauder family

The surname Bauder was first found in Swabia, where the name came from humble beginnings but gained a significant reputation for its contribution to the emerging mediaeval society. It later became more prominent as many branches of the same house acquired distant estates, some in foreign countries. Their social status was continually elevated by their great contributions to society. In the Swabian dialect, the word Bauder or Buder meant "Schlaeger" or, in English, "striker."

Early History of the Bauder family

This web page shows only a small excerpt of our Bauder research. Another 83 words (6 lines of text) covering the year 1350 is included under the topic Early Bauder History in all our PDF Extended History products and printed products wherever possible.

Another 28 words (2 lines of text) are included under the topic Early Bauder Notables in all our PDF Extended History products and printed products wherever possible.

In the United States, the name Bauder is the 10,262nd most popular surname with an estimated 2,487 people with that name. [1]

Bauder migration to the United States +

Bauder Settlers in United States in the 18th Century

Bauder Settlers in United States in the 19th Century