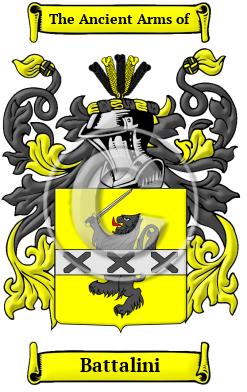 From the ancient and picturesque Italian region of Venice emerged a variety of distinguished names, including the notable surname Battalini which was derived from the Italian word "Battaglia," or "battle." This surname was a nickname for a warrior or professional private soldier, which then became a surname. There are also places named Battalgia, and no doubt the surname also arose describing one who came from one of these places. There are villages named Battaglia in Udine, Padova, Teramo, Trapani, and Salerno amongst other regions.

Early Origins of the Battalini family

The surname Battalini was first found in the northern half of Italy with major families of the name being recorded in Venice and the Veneto region, Bologna, Rimini, and Pisa from the 13th century.

Early History of the Battalini family

This web page shows only a small excerpt of our Battalini research. Another 25 words (2 lines of text) covering the years 1748, 1532, 1643, 1717, 1772 and 1870 are included under the topic Early Battalini History in all our PDF Extended History products and printed products wherever possible.

Prominent among members of the family was Girolamo Battaglia, a distinguished soldier in the military in the second half of the 15th century; Francesco Battaglia, an architect born in...
Another 29 words (2 lines of text) are included under the topic Early Battalini Notables in all our PDF Extended History products and printed products wherever possible.

Migration of the Battalini family

Some of the first settlers of this family name or some of its variants were: Daniel Battaglia who arrived in Philadelphia in 1864; Angelo Battaglia, who arrived in New York on July 25, 1883 aboard the "Archimede" from Palermo.