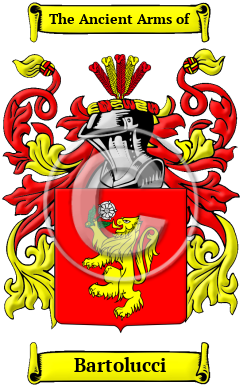 Early Origins of the Bartolucci family

The surname Bartolucci was first found in Florence (Italian: Firenze), where several bearers of the Bartolucci family name played prominent roles in the affairs of that city from 1373 to 1473. There were several of the family ennobled. Bartolomeo Bartolini of Perugia was awarded the feudal domain of Biscina in 1499. Members of a family bearing the name Bartolini from Udine were admitted to the Noble Council of the city in 1516. Leonardo Bartolini was Archbishop of Pisa in 1518. Girolamo Bartolini was mayor of Sassuolo in 1576.

Early History of the Bartolucci family

Prominent among members of the family was the Bartoli family of Velletri, who were involved in government in 1346; the Bartoli family of Siena, who were recognized as nobility; Jacopo Bartoli, a military captain of the Sienese army in Brescia; the Bartoli family of Florence, of whom 11 members became priests; Carlo d'Agnolino Bartoli, made Bishop of Siena in 1427; Cosimo Bartoli (1503-1572), Italian diplomat, mathematician, philologist, and humanist; Erasmo Bartoli Filippino (Erasmo di Bartolo) (1606-1656), an Italian priest, composer, and teacher at the conservatories in...
Another 85 words (6 lines of text) are included under the topic Early Bartolucci Notables in all our PDF Extended History products and printed products wherever possible.

Migration of the Bartolucci family