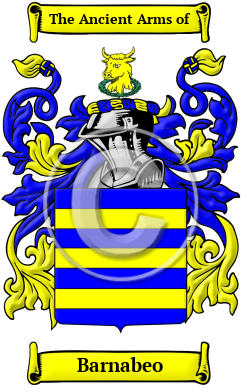 Early Origins of the Barnabeo family

The surname Barnabeo was first found in the north of Italy, especially in Tuscany. The name occasionally appears in the south, usually in forms which end in "o," but the northern forms ending in "i" are much more common. The name Barnabeo, like many surnames originated as a personal name. The name Barnabas was a fairly common surname in Europe at the time surnames usage was first beginning, and was made popular by the fact that it was borne by a character in the Bible, a companion of St. Paul. The name means "son of Nabia," the name Nabia coming from an Arameic word meaning "confession."

Early History of the Barnabeo family

This web page shows only a small excerpt of our Barnabeo research. Another 75 words (5 lines of text) covering the years 1500 and 1559 are included under the topic Early Barnabeo History in all our PDF Extended History products and printed products wherever possible.

Another 35 words (2 lines of text) are included under the topic Early Barnabeo Notables in all our PDF Extended History products and printed products wherever possible.

Migration of the Barnabeo family

Some of the first settlers of this family name or some of its variants were: the $ family, who settled along the east coast of North America in the late 19th century.