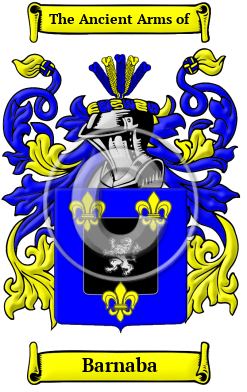 The enchanting region of Bourgoigne was the historical homeland of the prominent surname Barnaba. Barnaba is a topographic surname, which is a type of hereditary surname. These were given to a person who resided near a physical feature such as a hill, stream, church, or type of tree. Habitation names form the other broad category of surnames that were derived from place-names. They were derived from pre-existing names for towns, villages, parishes, or farmsteads. Other local names are derived from the names of houses, manors, estates, regions, and entire counties. As a general rule, the greater the distance between an individual and their homeland, the larger the territory they were named after. For example, a person who only moved to another parish would be known by the name of their original village, while people who migrated to a different country were often known by the name of a region or country from which they came.

Early Origins of the Barnaba family

The surname Barnaba was first found in Burgundy (French: Bourgogne), an administrative and historical region of east-central France.

Early History of the Barnaba family

This web page shows only a small excerpt of our Barnaba research. More information is included under the topic Early Barnaba History in all our PDF Extended History products and printed products wherever possible.

Spelling variations of this family name include: Barnabe, Barnabé, Barnaba, Barnabaud and others.

Notable amongst the family at this time was the abbey Jean-Claude Barnabaud, parist priest of Vielverge at the Dijon diocese at the time the Revolution broke out. Bothered by this turn of events, the priest emigrated to Switzerland and, at a Friboug meeting, was designated among the French priests to travel in order to take collections from the States of Europe towards the French clergy, which had suffered...
Another 68 words (5 lines of text) are included under the topic Early Barnaba Notables in all our PDF Extended History products and printed products wherever possible.

Migration of the Barnaba family

Some of the first settlers of this family name or some of its variants were: 50 individuals who arrived from France onto Canadian shores between 1600 and 1900. Among them, René Barnabé, born in 1671 in Port Royal, Quebec, is cited at his marriage in 1695 and at his death in 1752. An Acadian Barnabe family is cited in Minas, Nova Scotia in 1700.