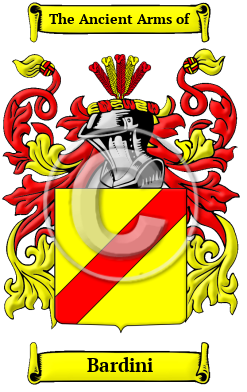 A variety of distinguished and notable names have emerged from the beautiful and historical Italian region of Tuscany, including the surname Bardini. The surname Bardini came from the medieval personal name "Bardo," a short form of names such as "Lombardo" or "Bernardo;" the Bardi form is a patronymic or plural form of Bardo.

Early Origins of the Bardini family

The surname Bardini was first found in Florence (Italian: Firenze), where the main branch of the family originates. The earliest records of the family date back to 1112, when Pagano di Bardo and his family were the owners of a castle in Rubella. Other records include Bartolo Bardi, a Florentine priest in 1310; and Bartolomeo Bardi, a nobleman of a banking family, in Florence in 1320. Contessina de Bardi (c.1390-1472,) was heir of the Florentine banking family and married Cosimo de Medici in 1414.

Early History of the Bardini family

Italian surnames have a surprising number of forms in comparison with other European surnames because they reflect the regional variations and the many dialects of the Italian language, each of which has its distinctive features. For example, in Northern Italy the most standard Italian surname suffix is "I", whereas in Southern Italy the most typical surname suffix is "O". Sardinian is very different from other forms of Italian and in fact, it is considered to be its own distinct language. Additionally, spelling changes frequently occurred because medieval scribes, church officials, and the bearers of names, spelled names as they sounded rather than according to any specific spelling rules. As a consequence of the major changes in the Italian language and in the local spellings of Italian surnames that occurred over the course of history, there are numerous variations for the surname Bardini. These spelling variations include Bardi, Bardo, Bardelli, Bardella, Bardellini, Bardelloni, Bardetti, Bardetta, Bardini, Bardino, Bardola, Barducci, Bardotti, Bardoni, Bardone, Bardacci, Barduzzi, Bardani and many more.

Prominent among members of the family was Alessandro Bardi (b. 1323), a Tuscan diplomat; Bartolomeo Bardi (d. 1349), who was appointed Bishop of Spoleto in 1320; Alessandra Bardi, a female author who lived in Florence in 1415; Filippo Bardella and his brothers Giugliemo Bardella and Federico Bardella, renowned doctors in Ferrara in 1500; Uberto and Girolamo Bardi, who were both Cardinals in Florence; Salvatore Bardi, Baron of Cerda in 1526; as well as Cosimo Bardi, a prominent lawyer in Florence during the early 17th century. Giovanni Bardi, Count of Vernio, was "a Florentine noble, [who] lived...
Another 95 words (7 lines of text) are included under the topic Early Bardini Notables in all our PDF Extended History products and printed products wherever possible.

Bardini migration to the United States +

Bardini Settlers in United States in the 19th Century