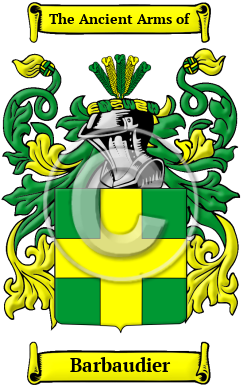 The prestigious surname Barbaudier originated in the beautiful and majestic region of Poitou in France. France was notorious for its eccentric kings, but it was revered for its contributions to European art and culture. The surname Barbaudier originally came from the region of Poitou. It is a topographical name, which is a type of hereditary surname.

A barbeau (barbel) is a large large insect beetle, of the subfamily Melolonthinae and a type of fish that is "so called because it has two beards next to each jaw." [1]

Early Origins of the Barbaudier family

The surname Barbaudier was first found in Poitou, where this ancient family was established in ancient times.

Early History of the Barbaudier family

Spelling variations of this family name include: Barbaud, Barbaux, Barbauld, Barbault, Barbaudier and many more.

Notable amongst the family at this time was Maitre Jacques Barbireau was "a celebrated musician of the 15th century, choirmaster and teacher of the boys in the cathedral of Antwerp from 1448 till his death in 1491. Many of the great musicians of the 15th and 16th centuries were his pupils; he maintained...
Another 52 words (4 lines of text) are included under the topic Early Barbaudier Notables in all our PDF Extended History products and printed products wherever possible.

Migration of the Barbaudier family

Some of the first settlers of this family name or some of its variants were: Mr. Barbaud, his wife and his four children, who were established in New Orleans in 1732.