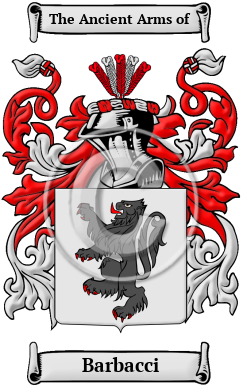 Italians first began using hereditary surnames in the 10th and 11th centuries, in response to the confusion caused by the growth of the Italian population at that time. People found themselves mistaken for others in both personal and legal matters. Nicknames, like Barbacci, were a popular source for surnames. They identified people through reference to a physical characteristic or other obvious trait. Barbacci was a name for a bearded person, derived from the words barba and bella, which together mean beautiful beard.

Early Origins of the Barbacci family

The surname Barbacci was first found in Milan (Italian: Milano, Milanese: Milan), the second-most populous city in Italy and the capital of Lombardy where the earliest records date back to 1145 with Filippo Barbo, a castle owner and leader of the town of Cremona.

Early History of the Barbacci family

This web page shows only a small excerpt of our Barbacci research. More information is included under the topic Early Barbacci History in all our PDF Extended History products and printed products wherever possible.

Italian surnames have a surprising number of forms in comparison with other European surnames because they reflect the regional variations and the many dialects of the Italian language, each of which has its distinctive features. For example, in Northern Italy the most standard Italian surname suffix is "I", whereas in Southern Italy the most typical surname suffix is "O". Sardinian is very different from other forms of Italian and in fact, it is considered to be its own distinct language. Additionally, spelling changes frequently occurred because medieval scribes, church officials, and the bearers of names, spelled names as they sounded rather than according to any specific spelling rules. As a consequence of the major changes in the Italian language and in the local spellings of Italian surnames that occurred over the course of history, there are numerous variations for the surname Barbacci. These spelling variations include Barbi, Barbis, Della Barba, Barbella, Barbetta, Barbetti, Barbini, Barbin, Barbolini, Barbucci, Barbuzzi, Barboccia, Barbozza, Barbone, Barboni, Barbacci, Barbasio, Barbato, Barbuto, Barboso, Barbisio, Barbisini, Barbisan, De Barba, Del Barba, Barbano, Barbana, Barbani, Barban, Barbanelli, Barbanotti, Barbanti, Barbantini and many more.

Prominent among bearers of this family in early times was the Barbani family of Venice, who were given noble status in the 12th century. The Barbi family in Venice gained noble status in 1203. The Barbazzi family of Messina moved to Bologna in the 14th century and Alessandro immediately became Count. Pietro Barbi was elected Pope in 1464 and given the name Paolo II. Marco Barbi was Cardinal in Venice in 1471. Luigi Barbi was Bishop of Treviso, Giuseppe was a count in Gubbio in the 15th century. Giovanni Giacomo Barba, born in Angri in the 16th century, dedicated his life...
Another 126 words (9 lines of text) are included under the topic Early Barbacci Notables in all our PDF Extended History products and printed products wherever possible.

Migration of the Barbacci family