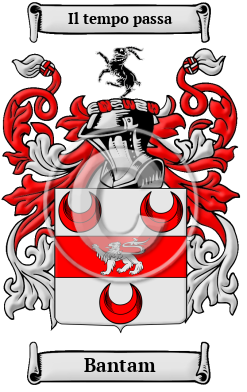 Early Origins of the Bantam family

The surname Bantam was first found in Northumberland, where Osgode on Badingtune was listed there in 972. [1] Bainton (St. Mary), is a parish, in the union of Stamford, soke of Peterborough in Northumberland. Bainton is also found in Oxfordshire, Cambridgeshire and Yorkshire [2] as the place name literally means "estate associated with a man called Bada," from the Old English personal name + "-ing" + "tun." [3] Cambridgeshire has the oldest listing of the place name c. 980 when it was spelt Badingtun.

Early History of the Bantam family

The name Bantam, appeared in many references, and from time to time, the surname was spelt Baynton, Bayntun, Bainton, Bainten, Banting, Baynten and many more.

Bantam migration to the United States +

The New World beckoned as many of the settlers in Ireland, known as the Scotch/Irish, became disenchanted. They sailed aboard the armada of sailing ships known as the "White Sails" which plied the stormy Atlantic. Some called them, less romantically, the "coffin ships." Amongst the early settlers who could be considered kinsmen of the Bantam family, or who bore a variation of the surname Bantam were

Bantam Settlers in United States in the 19th Century