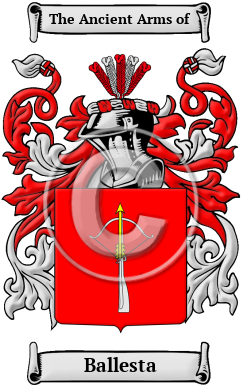 Early Origins of the Ballesta family

The surname Ballesta was first found in the northeastern region of the Iberian peninsula. The earliest references to the Spanish surname Ballesta date back to the thirteenth century, when one Ramon Ballester was lord of the castle of Alaro in 1285, at the time of the conquest of Mallorca by King Alfonso of Aragon.

Early History of the Ballesta family

This web page shows only a small excerpt of our Ballesta research. Another 69 words (5 lines of text) covering the years 1387, 1370, 1333 and 1405 are included under the topic Early Ballesta History in all our PDF Extended History products and printed products wherever possible.

Spelling variations of this family name include: Ballestero, Ballesteros, Ballesta, Ballesté and many more.

Prominent among bearers of the family name in this era was Antonio Ballester (died 1387), Archbishop of Athens from 27 March 1370, when appointed by Pope Urban VI, until his death; Arnaldo Ballester, who was counselor to the...
Another 38 words (3 lines of text) are included under the topic Early Ballesta Notables in all our PDF Extended History products and printed products wherever possible.

Migration of the Ballesta family

Some of the first settlers of this family name or some of its variants were: Alonso Ballersteros who arrived in New Spain in 1567 with his wife Constanza de Sese, Pedro Ballester who voyaged to Guatemala in 1577; and Francisco Ballesteros who sailed to Havana, Cuba with his wife Jeronima Perez de Ballesteros in 1597. Among later settlers were Jose Ballestero who emigrated to Puerto Rico in 1816.