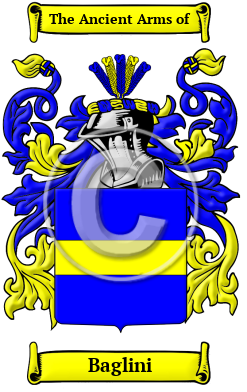 The distinguished surname Baglini originated in an area of Italy, known as the Papal States. Although people were originally known only by a single name, it became necessary for people to adapt a second name to identify themselves as populations grew and travel became more frequent. The process of adopting fixed hereditary surnames was not complete until the modern era, but the use of hereditary family names in Italy began in the 10th and 11th centuries. The surname Baglini is a common occupational name for a public official, the "balivio", which means bailiff.

Early Origins of the Baglini family

The surname Baglini was first found in Perugia (Latin: Perusia), the capital city of the region of Umbria in central Italy, crossed by the Tiber River, capital of the province of Perugia. Perugia took part in a rebellion in 295 B.C. and was reduced with the exceptions of the temples Vulcan and Juno. In the 9th century A.D the city was a papal territory but remained true to the Guelphs. The earliest record of the family Baglini is of Ludovico Baglioni, who was the Imperial Vicar for the leader Barbarossa in 1181. Other early records of the name include Socco Baglione, a valiant soldier in Perugia around 1260; Giovanni Andrea Baglione and Troilo Baglione were Bishops of Perugia, Gentile Baglione and Ercole Baglione both Bishops of Orvieto; Angelo Baglione was Bishop of Macerata.

Early History of the Baglini family

Baglini migration to the United States +

Baglini Settlers in United States in the 20th Century