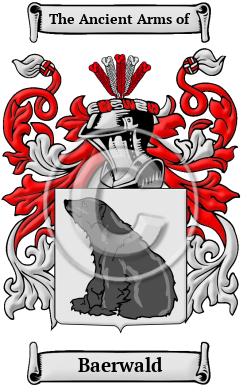 The distinguished family surname Baerwald originated in the lands which eventually became the German state of Prussia. This state was known for its majestic landscape, its rapid industrial growth, its military power, and for its contributions to European culture. However, in the medieval era, Prussia was fragmented and inhabited by numerous barbarian tribes, who fought amongst themselves for control of the land. The borders of the barbarian kingdoms, which were established after the fall of the Roman Empire, changed repeatedly. The region that came to be known as Prussia was roughly divided between the territories of Brandenburg-Prussia, West Prussia and East Prussia. The Baerwald family emerged in Brandenburg-Prussia, which is essentially the birthplace of modern Germany. By the 19th century, Brandenburg-Prussia had incorporated East Prussia, West Prussia and many other German territories. Moreover, in the late 19th century, it led the German states in the unification of Germany.

Early Origins of the Baerwald family

The surname Baerwald was first found in Prussia, where the family was anciently seated at Friedland, Prussian Eylau and Labiau. They established several branch houses of the name and some were not confined to the region. The Baerwalde family owned several properties in the region of Labiau in Prussia, from the beginning of the 1500s to the end of the 1600s.

Early History of the Baerwald family

This web page shows only a small excerpt of our Baerwald research. Another 66 words (5 lines of text) covering the years 1796, 1868, 1796, 1799, 1817, 1819 and 1868 are included under the topic Early Baerwald History in all our PDF Extended History products and printed products wherever possible.

Many cultural groups lived in the German states in medieval times. Each had its own dialect and traditions, and unique variations of popular names. Low German, which is similar to contemporary Dutch, was spoken in Westphalia. German names are characterized by additions such as regional suffixes and phrases that tell something about the origin or background of its original bearer. Further contributing to the variation in German names was the fact that there were no spelling rules in medieval times: scribes recorded names according to their sound. The recorded spelling variations of Baerwald include Berwalde, Berwald, Berwal, Berwaldde, Berwallde, Berwalde, Berwale, Berwalle, Barwalde, Baerwalde, Barwald, Berwaldm, Barwal, Barwal, Barwaldde, Baerwaldde, Barwallde, Baerwallde, Barwalde, Baerwalde, Barwale, Baerwale, Barwalle and many more.

Notable figures of the time with the name Baerwald were Franz Berwald (1796-1868), a Swedish composer who spent most of his life in Stockholm. He came from a family which boasted a long line of musicians. In his lifetime he composed symphonies, chamber music and two operas. Johann Friedrich Berwald was a violinist, son of one of the chamber musicians of the King of Sweden, born at Stockholm...
Another 66 words (5 lines of text) are included under the topic Early Baerwald Notables in all our PDF Extended History products and printed products wherever possible.

Migration of the Baerwald family

The state of Prussia was a great influence on the shape of modern Germany. After the Second World War, Prussia's land was divided among the Soviet Union, Poland, East Germany and West Germany and the state was abolished. Some Prussians remained in those countries after the war, while many others migrated to North America in search of a new start. Philadelphia was their primary point of entry to the United States, after which many of them moved on to Ohio, Texas, Illinois, California, New York, and Maryland. A large number of Prussians also migrated to Ontario and the prairie provinces as United Empire Loyalists. Analysis of immigration records has shown some of the first Baerwalds to arrive in North America, and among them were: Anna Berwald and Ernst Berwald who both arrived in New York City in 1850; Charles Berwald, who came to Philadelphia, Pa. in 1859; August Barwald arrived in America in 1895.