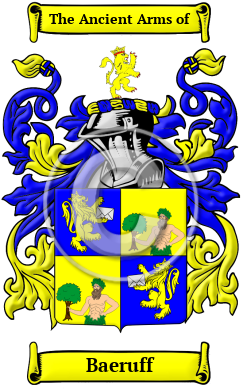 The Baeruff family name first began to be used in the German state of Bavaria. After the 12th century, as hereditary surnames began to be adopted, names that were derived from locations became particularly common. The family name Baeruff is a local surname. Originally denoting the proprietorship of an estate or influence within a village, the German preposition von, which means from or of, used with local names, was taken as a mark of aristocracy. The surname Baeruff was given to someone who lived in Bavaria. The family name Baeruff can be traced back to the Middle Ages, when Bavaria was a region characterized by court intrigue and heroic battles over power and prestige. The Baeruff family was involved in the ancient feuds between noble families, who competed for domination of the territory. In this era of rapidly changing political allegiances, the Baeruff family aligned itself with many different noble families and their support was sought by many leaders in their search for power.

Early Origins of the Baeruff family

The surname Baeruff was first found in Bavaria, where the name Beruff was anciently associated with the tribal conflicts of the area. They declared allegiances to many nobles and princes of early history, lending their influence in struggles for power and status within the region. They branched into many houses, and their contributions were sought by several leaders in their quest to maximize their power.

Early History of the Baeruff family

This web page shows only a small excerpt of our Baeruff research. Another 117 words (8 lines of text) covering the years 1792, 1787 and 1792 are included under the topic Early Baeruff History in all our PDF Extended History products and printed products wherever possible.

Many cultural groups lived in the German states in medieval times. Each had its own dialect and traditions, and unique variations of popular names. Low German, which is similar to contemporary Dutch, was spoken in Westphalia. German names are characterized by additions such as regional suffixes and phrases that tell something about the origin or background of its original bearer. Further contributing to the variation in German names was the fact that there were no spelling rules in medieval times: scribes recorded names according to their sound. The recorded spelling variations of Baeruff include Beruff, Berueff, Berueffe, Berufe, Beruffe, Beruth, Beruthe, Beruthe, Berrufe, Berruffe, Berruth, Berruthe, Baruff and many more.

More information is included under the topic Early Baeruff Notables in all our PDF Extended History products and printed products wherever possible.

Migration of the Baeruff family

The great European flow of migration to North America, which began in the middle of the 17th century and continued into the 20th century, was particularly attractive to those from Bavaria who wished to escape either poverty or religious persecution. For many Bavarian tenant farmers, the chance to own their own land was a major incentive. So the widespread colonization of the United States began in 1650, when many immigrants from Germany settled in pockets in Pennsylvania, Texas, New York, Illinois, and California. In Canada, German settlement centered in Ontario and the prairie provinces. Among those of this surname listed in various historical records were: Charles Beruff, who arrived in America in 1849.