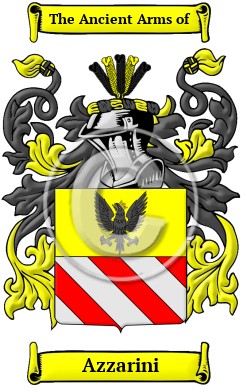 Before the 10th and 11th centuries, the ancient Italians went by only one name. Later, though, as people began to travel more, and the country grew, many added hereditary surnames. Occupational names, like Azzarini, were a simple way to get around this confusion. They were taken from words that identified people their professions. Azzarini was a name for a person who made battle axes as it is derived from the Italian word azza, which means battle-axe.

Early Origins of the Azzarini family

The surname Azzarini was first found in at Novara, capital city of the province of Novara in the Piedmont region in northwest Italy in 1312, with Pietro Azario, a count and wealthy lawyer, registered in that year.

Early History of the Azzarini family

This web page shows only a small excerpt of our Azzarini research. More information is included under the topic Early Azzarini History in all our PDF Extended History products and printed products wherever possible.

Italian surnames have a surprising number of forms in comparison with other European surnames because they reflect the regional variations and the many dialects of the Italian language, each of which has its distinctive features. For example, in Northern Italy the most standard Italian surname suffix is "I", whereas in Southern Italy the most typical surname suffix is "O". Sardinian is very different from other forms of Italian and in fact, it is considered to be its own distinct language. Additionally, spelling changes frequently occurred because medieval scribes, church officials, and the bearers of names, spelled names as they sounded rather than according to any specific spelling rules. As a consequence of the major changes in the Italian language and in the local spellings of Italian surnames that occurred over the course of history, there are numerous variations for the surname Azzarini. These spelling variations include Azzali, Azzalin, Azzalini, Azzaloni, Azzanelli, Azzarelli, Azzarello, Azzariti, Azzaretti, Azzati, Azzari, Azzario, Azario, Azari, Azzarini, Azzaro, Azzaroli, Azzarone, Azzaroni, Azzarri and many more.

Prominent among bearers of this family in early times was Alessandro Azzaloni, a was a judge in Reggio in 1752; Felice Azzaloni, who was a renowned Latin poet around the same...
Another 30 words (2 lines of text) are included under the topic Early Azzarini Notables in all our PDF Extended History products and printed products wherever possible.

Migration of the Azzarini family

A look at the immigration and passenger lists has shown a number of people bearing the name Azzarini: J.B. Azaretto, age 36, who settled in New Orleans, Louisiana in 1821; Maria Azzaro, age 33, who arrived in New York on June 18, 1883, aboard the &quot.