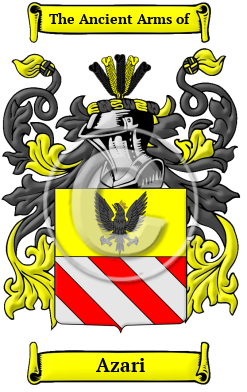 As a response to the confusion caused by the growth of the Italian population in the 10th and 11th centuries, many Italians took on hereditary surnames. People were commonly mistaken for others with the same name in both personal and legal matters. Occupational names, like Azari, were a ready solution. They identified people by referring to the kind of work they did. person who made battle axes as it is derived from the Italian word azza, which means battle-axe.

Early Origins of the Azari family

The surname Azari was first found in at Novara, capital city of the province of Novara in the Piedmont region in northwest Italy in 1312, with Pietro Azario, a count and wealthy lawyer, registered in that year.

Early History of the Azari family

This web page shows only a small excerpt of our Azari research. More information is included under the topic Early Azari History in all our PDF Extended History products and printed products wherever possible.

Enormous variation in spelling and form characterizes those Italian names that originated in the medieval era. This is caused by two main factors: regional tradition, and inaccuracies in the recording process. Before the last few hundred years, scribes spelled names according to their sounds. Spelling variations were the unsurprising result. The variations of Azari include Azzali, Azzalin, Azzalini, Azzaloni, Azzanelli, Azzarelli, Azzarello, Azzariti, Azzaretti, Azzati, Azzari, Azzario, Azario, Azari, Azzarini, Azzaro, Azzaroli, Azzarone, Azzaroni, Azzarri and many more.

Prominent among bearers of this family in early times was Alessandro Azzaloni, a was a judge in Reggio in 1752; Felice Azzaloni, who was a renowned Latin poet around the same...
Another 30 words (2 lines of text) are included under the topic Early Azari Notables in all our PDF Extended History products and printed products wherever possible.

Migration of the Azari family

An investigation of the immigration and passenger lists has revealed a number of people bearing the name Azari: J.B. Azaretto, age 36, who settled in New Orleans, Louisiana in 1821; Maria Azzaro, age 33, who arrived in New York on June 18, 1883, aboard the &quot.