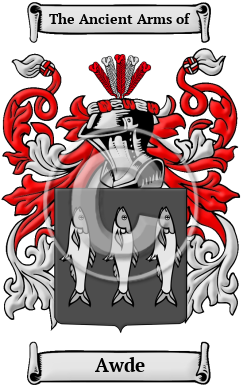 Early Origins of the Awde family

The surname Awde was first found in Ord, a village about 2 miles (3 km) south west of Berwick Upon Tweed in Northumberland that dates back to 1196 where it was first listed as Horde. [1] East Ord, Middle Ord and West Ord were all hamlets at one time and all owned by the Ord family until the early fifteenth century. The villages are essentially on the Scottish-English border of today so the family's movement through the ages on both sides is to be expected. By example, we draw the reader's attention to the township of Newbiggin in Northumberland. "This place, which is pleasantly situated on the north bank of the river Derwent, was for many years the residence of the Ord family, of whom Robert, who died in 1778, was chief Baron of the exchequer in Scotland." [2]

Early History of the Awde family

Spelling variations of this family name include: Orde, Ord and others.

Another 30 words (2 lines of text) are included under the topic Early Awde Notables in all our PDF Extended History products and printed products wherever possible.

Migration of the Awde family