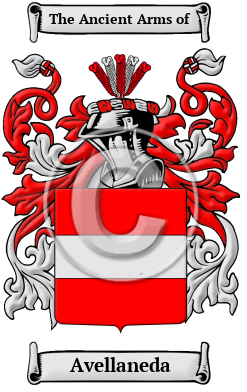 Early Origins of the Avellaneda family

The surname Avellaneda was first found in Sardinia (Italian: Sardegna, Sardinian: Sardigna), the second largest island in the Mediterranean Sea. The original inhabitants were Sicels. The Greeks colonized in 735 B.C. Phoenician settlements began in 6th century. Carthaginians arrived 410. Romans arrived, then the Saracens. Then the Norman Conquest said to be Sicily's brightest hour, 1057 A.D and taking 35 years. Without a doubt, the most famous of the family in early times was Saint Andrew (Andrea) Avellino (1521-1608), an Italian saint. Born at Castronuovo, he entered the Order of Theatines. In 1624, he was beatified by Pope Urban VIII, and in 1712 was canonized by Pope Clement XI. He is venerated as patron saint of Naples and Sicily.

Early History of the Avellaneda family

This web page shows only a small excerpt of our Avellaneda research. Another 83 words (6 lines of text) covering the years 1645, 1700, 1674 and 1741 are included under the topic Early Avellaneda History in all our PDF Extended History products and printed products wherever possible.

Another 37 words (3 lines of text) are included under the topic Early Avellaneda Notables in all our PDF Extended History products and printed products wherever possible.

Migration of the Avellaneda family

Some of the first settlers of this family name or some of its variants were: Baltasar Avella, who arrived in Mexico in 1596; Jose Avellan, who arrived in Puerto Rico in 1804; J. S. Avellar, who came to New York, NY in 1822; R. Avella, who settled in New Orleans in 1825.