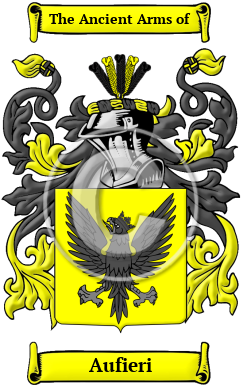 Early Origins of the Aufieri family

The surname Aufieri was first found in the Papal States, and later in most areas of the Italian peninsula. The name is particularly common around Naples. The name is less common in the northern, mainland area of Italy, except for the region of Piedmont, where it appears quite frequently in the form Alfero. In general, variations on the name which end in "i" come from the northern areas of Italy, whereas those ending in "o" are from the south. There are two possible origins for the name. It may be derived from the elements "athala," meaning "noble," and "faran," meaning "to move," in which case, the name was most likely given to a nobleman who had just arrived in the area from elsewhere in Italy. The other possibility is that the name comes from the word "alfiere," meaning "standard bearer." In this case, it would have been given to a man who held that post in an army.

Early History of the Aufieri family

This web page shows only a small excerpt of our Aufieri research. Another 49 words (4 lines of text) covering the years 1387, 1699, 1767 and 1640 are included under the topic Early Aufieri History in all our PDF Extended History products and printed products wherever possible.

Prominent among members of the family was Enrico Alfieri (b. 1387), a general minister of the Franciscan order in the early 15th century; Benedetto Innocenzo Alfieri (1699-1767), an Italian architect, a representative...
Another 32 words (2 lines of text) are included under the topic Early Aufieri Notables in all our PDF Extended History products and printed products wherever possible.

Migration of the Aufieri family

Some of the first settlers of this family name or some of its variants were: Salvatore Alfieri, who arrived in New York aboard the S.S. Anglia in 1891.