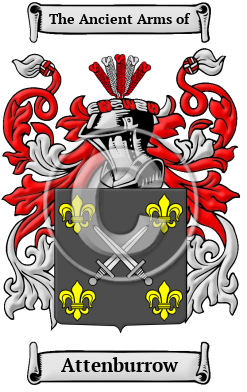 Early Origins of the Attenburrow family

The surname Attenburrow was first found in Nottinghamshire at Attenborough, a village and a suburb in the Broxtowe borough which dates back to the 12th century when it was listed as Adinburcha. [1] The place name literally means "stronghold associated with a man called Adda or Aeddi," having derived from the Old English personal name + "ing" + "burh." [2]

Bardsley also presumes the name could have been from "Attleburgh, a town in Norfolk I have placed Attenborough and Atterbury together, as they have probably become confused in the course of centuries. In any case Atterbury represents the older Attleburgh." [1]

To confuse matters more, another learned author notes "these surnames can hardly derive from Attenborough (Notts), earlier Adinburcha, which was not a village in the Middle Ages, the name being that of a church only. They are probably all from ME 'atten' plus the dative of OE bearu 'a grove' or beorg 'hill, mound'. The second element was, as often, changed to borough through association with burh. Hence 'dweller by the grove, hill or mound'." [3]

In an attempt to clear this confusion and explore other sources in this matter, the lion's share seem to agree with the former's origin of the name. They include: Lower [4], Barber [5] and Guppy [6].

We must look to Cambridgeshire to find the first record of the family in the year 1273, Alicia, Margeret and Richard Atteburwe who both appeared in the Hundredorum Rolls at that time. [1]

Early History of the Attenburrow family

This web page shows only a small excerpt of our Attenburrow research. Another 77 words (6 lines of text) covering the years 1455, 1487, 1680, 1719, 1680 and 1701 are included under the topic Early Attenburrow History in all our PDF Extended History products and printed products wherever possible.

Sound was what guided spelling in the essentially pre-literate Middle Ages, so one person's name was often recorded under several variations during a single lifetime. Also, before the advent of the printing press and the first dictionaries, the English language was not standardized. Therefore, spelling variations were common, even among the names of the most literate people. Known variations of the Attenburrow family name include Ateenborough, Atterbury, Attenbarrow, Attenborrow, Attenbrough, Attenbrow, Attenburrow, Addenbury, Addenborough, Addenbrow, Addenborrow, Atborough, Attborough, Atborow, Atbarow and many more.

Another 38 words (3 lines of text) are included under the topic Early Attenburrow Notables in all our PDF Extended History products and printed products wherever possible.

Attenburrow Settlers in Australia in the 19th Century

Attenburrow Settlers in New Zealand in the 19th Century