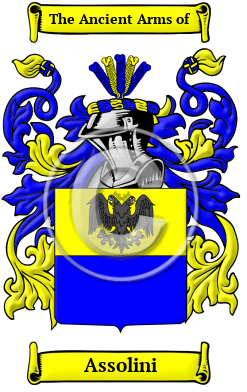 Early Origins of the Assolini family

The surname Assolini was first found in Fermo, anciently Firmum, a town in the Italian marches in the province of Ascoli Piceno. Built 246 B.C on a hill on which there was a citadel until 1446. The 4th Roman legion was settled there. It was originally a limestone walled city. The Church of S.Francesco is notable. It came under the papacy in 1550. In those ancient times only persons of rank, the podesta, clergy, city officials, army officers, artists, landowners were entered into the records. To be recorded at this time, at the beginning of recorded history, was of itself a great distinction and indicative of noble ancestry.

Early History of the Assolini family

Prominent among members of the family was Alberto D'Azzone, who was a lawyer in 1233 in Bologna; as well as the Azzoni family of Milan, who were made official nobility of the city in 1277; the Azzoni family of Fermo; Artico Azzoni, who was made official nobility of Venice in 1315; Francesco di Buonvicino Azzoni, a notary in Bologna...
Another 58 words (4 lines of text) are included under the topic Early Assolini Notables in all our PDF Extended History products and printed products wherever possible.

Migration of the Assolini family

Some of the first settlers of this family name or some of its variants were: Simon Azoni, who came to America in 1794; Charles Azone, who arrived in Philadelphia, Pennsylvania in 1856; and an Azuta who arrived in New Orleans, Louisiana, in 1858, at the age of 25..