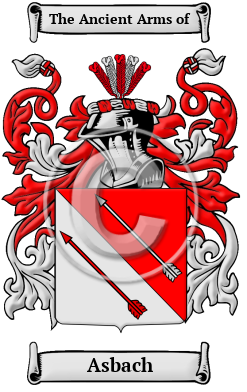 The surname Asbach, is either of toponymic or locative origin. Toponymic names are derived from the name of the place where the bearer once lived or held land. Asbach comes from Asbach, a place name, and name of several streams and rivers in the area surrounding the Sieg, Lahn, and Raum rivers in Northern Germany. The word "asbach" is composed of the elements "as" meaning "muddy or murky water" and "bach" meaning "stream." The name is also commonly seen with variants spelled with a "p" as these consonants are linguistically very similar in the German language.

Early Origins of the Asbach family

The surname Asbach was first found in Germany, where the name Asbach came from humble beginnings but gained a significant reputation for its contribution to the emerging mediaeval society. It later became more prominent as numerous branches of the same house acquired distant estates, some of which were located in other countries. Through the acquisition of these estates as well as their important contributions to society, the family successfully elevated their social status. The name can be traced to Styria, where a branch of the Aspach family died out in the 15th century. Later an Albert von Asbeck (d.1558,) also written as Aszbeke, was recorded as a knight in a German religious order.

Early History of the Asbach family

This web page shows only a small excerpt of our Asbach research. Another 150 words (11 lines of text) covering the years 1760, 1814, 1817, 1821, 1826, and 1837 are included under the topic Early Asbach History in all our PDF Extended History products and printed products wherever possible.

Another 30 words (2 lines of text) are included under the topic Early Asbach Notables in all our PDF Extended History products and printed products wherever possible.

Asbach migration to the United States +

Asbach Settlers in United States in the 18th Century

Asbach Settlers in United States in the 19th Century