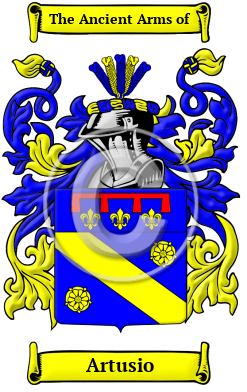 The Emilia Romagna region of Italy is the locale where the Artusio surname was first found. Although the people in this region were at one time known by only a single, personal name, it later became necessary for them to adopt a second name to identify themselves as populations grew and travel became more frequent. The process of adopting fixed hereditary surnames was not complete until the modern era, but the use of hereditary family names in Italy began in the 10th and 11th centuries. Artusio is one of the Italian patronymic surnames, created from the father's given name. The surname Artusio came from the Breton given names Artuir and Arthur. This personal name is of very ancient origin and is derived from the Celtic word art, which means bear. The name Arthur is also related to the Greek Arcturus, which means bear or guardian and is the name of the bright star in the constellation Bootes.

In comparison with other European surnames, Italian surnames have a surprising number of forms. They reflect the regional variations and the many dialects of the Italian language, each with its own distinctive features. For example, in Northern Italy the typical Italian surname suffix is "i", whereas in Southern Italy it is "o". Additionally, spelling changes frequently occurred because medieval scribes and church officials often spelled names as they sounded rather than according to any specific spelling rules. The spelling variations in the name Artusio include and others.

Migration of the Artusio family

Discovered in the immigration and passenger lists were a number of people bearing the name Artusio: