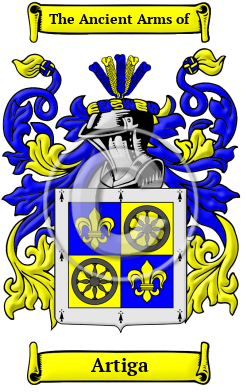 Early Origins of the Artiga family

The surname Artiga was first found in Castile, in north central Spain.

Early History of the Artiga family

This web page shows only a small excerpt of our Artiga research. Another 170 words (12 lines of text) covering the years 1095, 1492, 1492, 1701, 1702 and 1873 are included under the topic Early Artiga History in all our PDF Extended History products and printed products wherever possible.

Prominent among members of the family were Juan de Ortega, first Bishop of Almeria (after 1492); eighteenth century Spanish painter Francisco Ortega; nineteenth century Mexican poet and politician Francisco Ortega; eighteenth century Archbishop of Mexico Juan Ortega Montáñez, who was named Viceroy and governed New Spain...
Another 45 words (3 lines of text) are included under the topic Early Artiga Notables in all our PDF Extended History products and printed products wherever possible.

Artiga migration to the United States +

Artiga Settlers in United States in the 19th Century